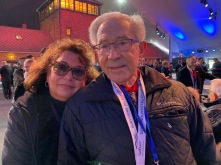 Last week, my daughter Gail and I traveled to Auschwitz, Poland to attend the 75th anniversary of the liberation of the concentration and death camp. It was an incredibly moving and inspirational experience. Gail and I have made many new friends, for which we are very grateful. I took notes during our visit – so that I could share my impressions and insights from our journey with you all.

On Monday, January 27, 2020, it was a blustery cold day, when Gail and I joined the other Holocaust survivors and their families at the Auschwitz anniversary event. 15 years ago, 1500 survivors attended. This year, only about 200 survivors made the trip. With the majority of us all in our 90’s, this was likely our last gathering. Knowing this fact, made the event even more remarkable.

On this day back in 1945, we were all so young- just kids. But the memories we share, standing together today, side by side, in this place where it all happened, doesn’t really feel all that long ago. It was so special being able to bond and express our love and admiration for one another. We also shared a profound feeling of satisfaction and victory. Because Hitler did not win. He could not eliminate us. We are still here – and will always be here. Our strength and perseverance resulted in several generations of Jews, who will forever hold our legacy in their hearts.

Being at Auschwitz, naturally brought back all of the feelings, and horrific images of the many atrocities I witnessed. My heart was heavy with thoughts of my parents, siblings and other family members who perished here. But my sadness was soon replaced with feelings of joy. Because I know, if they could see me and my daughter here today, they would be incredibly proud. I don’t know why I was chosen to be one of the survivors, but I do know that I always saw my life as a precious gift. I have been using every waking moment to try and make a difference, to give back to my people, and to give a voice to the 6 million Jews who can no longer speak.

Our heritage, our history, and the lessons of the Holocaust live on through our people – and through the lessons we teach ALL of our children. That is why this Spring, I am launching the ZACHOR Holocaust Curriculum (ZHC). ZHC will be an interactive online program to support educators as they teach their students about the Holocaust. It will be an extension of the work we have been doing at the ZACHOR Remembrance Foundation, which I started back in 2009.

Making Holocaust education easier to navigate and implement into curriculum has never been more essential. Research shows that it’s a challenge getting young people to relate to the Holocaust experience. There’s also a growing number of young people who don’t even know about the Holocaust – partly due to the widespread propaganda from deniers, as well as the fact that teaching about the Holocaust isn’t mandatory in some school districts. With fewer and fewer Holocaust survivors left to personally speak about their experiences, I want to be sure there is an everlasting resource for future generations to learn about this important part of our history.

Many dignitaries attended the anniversary event, representing almost every country across the globe. There were powerful speakers, whose words resonated with me deeply. World Jewish Congress President Ronald S. Lauder’s speech was spot on – and ended with a well-deserved standing ovation. His speech is worth hearing and sharing – you can watch his full speech here.

“The attacks on Jews, the killings, the vicious slanders have only grown worse… words are not enough. Political speeches are not enough. Laws must be passed. Severe, tough, real laws, that will put these hatemongers away in prison for a long, long time. Children must be educated to know where the hatred of Jews leads.” – Ronald S. Lauder, World Jewish Congress President

I want to talk a bit about Poland – as there are conflicting views about the role of the people and the government during the War. Many people are quick to condemn the Polish population for aiding, abetting, and siding with the Nazis. I will agree that in some individual cases that may be true. But I certainly would not condemn an entire nation. We don’t know how other nations would have reacted if the Death Camps were all stationed among their countries, the way they were in Poland. Poland was the only WWII country, in which helping Jews was punished by the death penalty. Despite that fact, Polish citizens constitute the world’s largest group of individuals who have been honored by Yad Vashem of Jerusalem with the Righteous Among the Nations medal – for saving Jews from extermination by the Nazis for selfless reasons. Many Jews took refuge in Polish houses, thereby endangering the lives of their Polish friends and neighbors. Conversely, there were other Poles who would turn their neighbors in. We must remember – there is good and bad in all of us.

My hope is that we have learned a vital lesson from the past- that we can and must stop the hatred. It all starts with education – and we must work together so that no one – not our political representatives, our educators, or our neighbors – will ever forget the lessons we learned 75 years ago. We are all God’s creation, so why can’t we live side by side, and appreciate our differences, rather than hate them. Remember that “love and hate are both contagious, so choose love.”