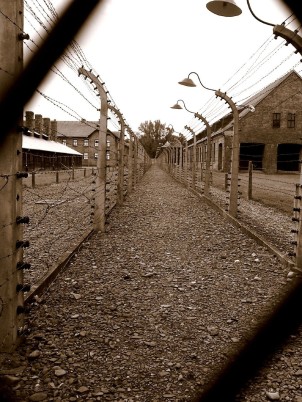 In 1996, at the request of my 10 year-old grandson, Adam, I broke my 50-year silence, to speak publicly about the Holocaust.  When Adam asked me to talk to his 6th grade class, I had no idea that in addition to providing a new experience for the students, it would open a new door to an unexpected purpose for my life. All I knew then was that I was frightened at the prospect of opening an old door to great pain.

The positive response of my grandson’s classmates and their teacher showed me that my experiences as a Holocaust Survivor were of intense interest to others. I could tell by their rapt attention and follow-up questions, that I was a source of important answers. No one would be more surprised than I was that the 2 hours that  I spent in that elementary classroom would cause me to embark—as a 70-year-old retiree–upon a “career” in providing Holocaust Education.

In the seventeen years following my first attempt at public-speaking about the Holocaust, I have traveled from Las Vegas to California, from the Pacific Northwest to Poland, from Tennessee to New York, speaking to hundreds of audiences.  And as a result of the questions from students, teachers, parents, religious groups, government officials and even other Survivors, I decided to write my memoir “LIVING A LIFE THAT MATTERS:  from Nazi Nightmare to American Dream.”  Unlike other Holocaust memoirs, however, the basis of mine would be more than my Holocaust experiences. It would be framed around the answers to all those questions asked by my audiences. I would tell my story in a way that would address what others have wanted to know. And it wouldn’t stop with Liberation. It would continue to the present day, thereby showing that a happy, loving, productive, meaningful life is possible after surviving unspeakable horror.

I hoped that by showing how I faced profound challenges, worked hard, attained the American Dream, and lived a “life that mattered,” that others would be inspired to do the same. By placing a deeply personal story within a broad historical context, this memoir allows the reader to see the step-by-step development of a human being in relation to world events. I hope that readers will be motivated to evaluate the obstacles, opportunities that life brings, and be inspired to live lives that matter.